Social acceptability: for a biogas project supported by population

Obtaining the social acceptability for a biogas project is the art of getting the project accepted by population living in the host territory. It is the ability to collaborate with local stakeholders and take concrete actions to mitigate their concerns about biogas. It is to put at the forefront the profitability, the efficiency and the well-being of the community during the implementation of the project. The quality of life becomes, for the citizens, a central concern. The fear of seeing it deteriorate after the implementation of a biogas project sometimes leads to strong opposition from the population. The secret, for the project developer: rigorous planning, continuous communication started as soon as possible with the host communities, and the right technical solution.

Why seek the social acceptability for a biogas project with the population?

Getting the social acceptability of the population has several benefits for the developer and the communities. First of all, the project developer saves a lot of time and money by taking into account, from the beginning, citizens’ worries and perceptions of biogas disadvantages.

Indeed, the controversy aroused by the project and the management of successive corrective actions to be made come at a very high cost for the developer. For their part, citizens need to feel heard and to better understand what comes out of the biogas process.

They want to collaborate on a transparent process and be clearly informed at every stage of the project. It is important for the population to perceive that a biogas project implemented in their territory will have positive impacts for them as much as for the developer.

To learn more, take a look at our article on the benefits of biogas for the population.

The population has some concerns about biogas projects, which may affect its social acceptability. These are often fueled by controversies making headlines and the complexity of understanding the process of anaerobic digestion. For these reasons, the role of the project developer is to listen to questions, to master all parts of the project and to popularize them in comprehensible terms. Here are the concerns of citizens who are most opposed by them and some corresponding solutions.

One of the most common concerns of citizens is the smells that may emanate from the biogas facility in their community. It is caused by the type of materials generally treated by these projects, namely, among others, manure or organic waste, perceived as odorous.

The anaerobic digestion process consists of fermenting the material in an airtight medium without oxygen. This organic material thus becomes odorless, unlike that which has been degraded in the open air or unfermented.

However, odors can occur during transport, storage, loading and unloading of the materials to be treated. Project developers must therefore pay particular attention to this issue.

Reduce the odors risk of a biogas project

To reduce the risk of odors from a biogas plant, the developer needs to think carefully about project design and planning. Thus, it will obtain more social acceptance of the biogas project.

Principles to remember during project planning and design

It must be near the source of waste to be treated to reduce road traffic while remaining away from citizens’ homes, for example.

For example, trucks carrying materials, the on-site loading and unloading shed, and storage and pre-treatment buildings must be constructed so that the waste does not come into contact with the air.

Thanks to certain technologies, an impact study and an odor management plan, among others, the developer will be able to establish a reference level and plan the best solutions or technologies to limit odors.

Technical solutions to prevent and reduce the odors of anaerobic digestion

Other technical solutions can be provided during the designing of the biogas project to prevent harmful odors. The project developer can also apply them to correct odors problems that occur after the construction of the facilities.

It allows an initial inventory of odors in certain strategic places. It takes into account factors such as the origin of perceived odors, their intensity levels and their continuous or intermittent nature.

Increasingly used, this technology makes it possible to make an initial evaluation of the odors and a continuous follow-up after the construction of the biogas plant. The developer can therefore optimize his project.

It is a technique for treating air and, in particular, removing harmful odors. One solution, water for example, will pass the odor-emitting chemicals from the gas phase to the liquid phase by absorbing them.

This technique is biological, that is to say that it treats odors thanks to micro-organisms. Indeed, this treatment consists in forcing the passage of gas in a packing material such as peat or compost.

Neutralizing products for odors are a supporting technique to be used in the event of odor emissions that are inevitable or accidental. These products dissolve the molecules responsible for odors using chemical processes or adsorption.

To learn more about the principles of odor management, consult the Guide of good practices for methanation projects of the Technical Association Energy Environment (ATEE) [PDF, French, 3674 KB].

The impact on the landscape

The concerns of the population with regard to anaerobic digestion projects also affect its impacts on the local landscape and the industrial aspect that it gives to it. Developers must consider the visual integration of the facility into the surrounding landscape to improve the social acceptability of the biogas project.

In addition to using an architect and checking the relevant regulations, the developer can, in particular:

One of the main concerns of the population about biogas projects is the increase in road traffic. Generally, the number of truck passes for a project providing 2,500 4-person households is only around 10 vehicles per working day.

However, the developer must optimize the road traffic management generated by the project during the planning phase.

He must, for example:

Host communities of a biogas project are also concerned about an increase in the level of ambient noise, which hinders their social acceptability. This concern is generally associated with the transport of residual materials by truck or the operation of the cogeneration engines.

The developer can take several actions by planning his biogas project. Note, for example:

Plan a biogas project by communicating better with the population

To make a biogas project accepted by the population and other local actors, the developer must establish communication with them from the first studies and planning steps. This approach aims, in particular, to:

The sooner the developer initiates a communication with the actors, the better the project could be accepted by them. Indeed, a late communication could open the door to third sources, with good intentions or not, diffusing an altered information.

An analysis of social acceptability compares the planning of a biogas project with a process of negotiation and compromise. Participants can include the developer, the communities, the necessarily consulted parties or others.

How to inform the community about a biogas project?

Some principles can help the biogas project developer communicate with the community and establish a dialogue to enhance social acceptability. The goal is to develop a relationship of trust and transparency with the population and local actors.

Here are some principles to apply:

Familiarity with the project’s land-use issues will help the developer identify the major concerns, the stakeholders that could influence the project, the best ways to communicate with the community and others.

The project developer must popularize the anaerobic digestion process. He can accompany his explanations with diagrams, statistics, figures to make his approach concrete. Anaerobic digestion is a complex process often unknown to the population.

Indeed, local partners can help the developer to plan his biogas project and his communication with the community. They have an excellent knowledge of local issues.

The developer does not have to take into account all the concerns of the citizens or other stakeholders. However, he must demonstrate listening, understanding and clarity, and propose realistic solutions.

To find out more about this complex aspect of social acceptability, consult ADEME’s Guide to Good Biogas Practices [PDF, English, 3674 KB] or the European Commission’s guide for biogas promoters [PDF, English] , 1379 KB].Also take a look at our Development Guide to better plan your biogas project.

Which means of communication to choose?

The project developer can use a variety of means of communication to obtain social acceptability for his biogas plant. The choice of the right means will depend on the needs of each community.

Among the most used means of communication are, among others: 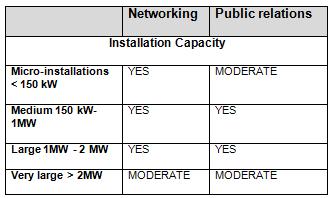 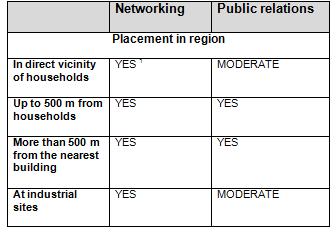 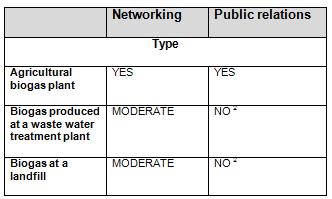 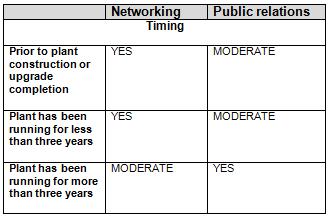 BiogasWorld is an active player in the biogas industry. Through its role as a project accelerator and intermediary to connect actors, the company is uniquely positioned to help developers build relationships with local business partners.

Our advanced report tool helps developers in this direction. Need help planning your project or finding the right technology to mitigate problems? Check out our complete list of service providers in the industry. The ball is in your court!